These beautiful days are lost, buried
in the dark, fertile earth along side
the bones of our ancestors.  Peel back
the sky's black curtain, revealing
the watercolor smudges of everything
which remains: The holy and profane,
the dark and the terrible, storm and peace.

It has been years since I tried writing a poem a day for NaPoWriMo.  This isn't a confession because I don't feel guilty about it in the slightest.  I am proud of my past efforts and I am thrilled to see so many people attempt to write a poem a day for an entire month.  And it isn't like there hasn't been a whole lot of material /fodder/pop culture happenings to inspire poetry, but this isn't my yea . . . again.

I am coming down off the tail end of completing a manuscript which hopefully will be out in the world by summer, and I am not writing poems.  I haven't written a poem in months.  Still not a confession---just a statement.  This is just my pattern.  I write steadily until I have a project in mind, then everything turns to that project.  After I turn my writing attentions to that project, everything else dies.  I write and write and re-write and write more towards that one thing.  After it's over, I have no writing energy left.  I literally have to re-learn how to write poems of a different voice, subject matter, and/or reflection.  It happens every time.  What has taken me years to learn is to ignore this particular kind of emptiness and silence.

I used to panic.  I used to scare myself into writing terrible poems because I thought if I didn't keep writing I would lose what little talent I had and I would never write another good poem.  I am not saying my "good" poems are really that great.  I am just saying my poems during those times were/are particularly bad.  Well, it has finally started to stick.  I have learned to accept the fact I am not a consistent writer of poems.  I do not write on a steady schedule.  I am not an aggregate poet, in that  I have a batting average when it comes to poems.  I love all my finished poems even if editors hate them all.  I have come to accept that I have forgotten how to write new poems, and it will be some time before that happens.

What's more, with every passing day I am learning to live with the sort of poet I am and the kind of poet I will never be.  Rather than going into any of that, I will simply provide you a poem to read.  It's a poem I like, which means it's good enough to share.


Spring rain---
This cold morning
lasting forever
Posted by Justin Evans at 9:49 AM No comments:

Book Review: Shaindel Beers The Children's War and Other Poems

The Children's War and Other Poems 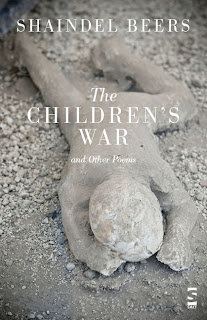 
Having read Shaindel Beers' first book of poetry and identified with it on a personal level, I was excited to read this book.  From the moment I heard the title, I knew I was in for something special and meaningful.  The title certainly is up-front and honest.  There is no subterfuge.  The world Beers brings forth in this book is daunting and relentless . . . and worth every minute you spend engaged in it.


Beginning with stunning first person narratives of war and violence, Shaindel Beers begins to discuss the things we know of but would much rather forget.  That in itself is an easy statement to make, because we would all rather forget about war and violence, but there is a deeper indictment going on here.  The unsettling truth these poems begin to reveal is that we would much rather forget the violence, pretending it doesn’t exist, than actually doing something to stop it.  This is a bitter pill to take, but swallow it we must.  At times we would like to believe we are as impotent as the children as they recount their tales, but in the backs of our minds always lingers the truth that we are not only culpable for the violence, we remain ever capable to make the world a better place yet unwilling on so many levels.

Walking into the title poem, Beers gives us little respite from the heartbreak, but one kindness she bestows is breaking the poem into smaller, separate sections.  In this we are able to take on manageable fragments, digest as we like the compelling stories and images.  Slowly, the poems begin to expand in scope and emotional landscape.  With each passing section, a larger picture is formed and the reader can’t help but be drawn into a higher level of consciousness, more in tune with the larger world.

One such passage, the opening lines from “After Martija’s Watercolor, Croatia” gives us this:

There are things that can happen that you can’t draw.


A soldier ripping off a baby’s diaper and slamming him


into the wall because it will be easier if the baby


cannot cry. Your mother without a head. You paint splotches.

Of course the shock is intentional.  To hide this sort of thing from the reader might let us get away clean.  Like any responsible artist, Beers knows some things are absolutes.

In the second, longer section, we are graduated to the more complex understandings of war, violence and pain.  It is a testament to Beers’ ability to know where that line is because I will be honest and tell you it took me going back into the book to realize that divide.  It is this second section which begins anew, serves to show in some ways how pervasive the epidemic of violence has become— how much of the culture of war we have internalized into our own lives.  Here there are poems which highlight the war each of us wages with other people, our lives, our past, and families.

My favorite poem from this section is probably a strange choice. “Dark-haired girl in the park—” shies away from the weightier structure of most the other poems and presents a war of almost the mildest sort, the conflict between parent and child as the child comes of age.  Using that struggle, we see there is some necessity in struggle.  A young girl sees herself as a sexual being much to the dismay of her parents.  Her need to tear herself away from them is not based in hatred, but rather the need to be desired.  The girl is young, innocent to what may result in her defiance.  We are reminded that for many of us, especially in the privileged first world, our first struggles are mild in comparison to the reality most children in the world face.  We look back to our adolescence with nostalgia, a sweetened pain which is often savored.  Most of the world’s children are not so lucky.  Most of the world’s children could teach us all about real pain and suffering.

Ultimately this is an important book on many levels.  The Children’s War and Other Poems is a sharp departure from Shaindel’s first book, A Brief History of Time.  I do not like making comparisons between two different works of art so I will simply restate this book is a bold and sobering step away from her first book.  The Children's War and Other Poems carries with it a wonderful voice, weighty ideas, and an unflinching eye for our darker expressions.  It is a book which you will want to return to again and again.
her first book.
Posted by Justin Evans at 11:37 AM No comments:

Justin Evans
Originally from Utah, I am currently living in Nevada. I served in the army from 1988-1992, eventually graduating from Southern Utah University for my undergraduate work in History, and UNR for my graduate work in Literacy Studies. I teach English, History, and remedial reading. My first chapbook, Four Way Stop, was published by Main-Traveled Roads in 2005. My second chapbook, Gathering up the Scattered Leaves, was released from Foothills Publishing in 2006. Next, Working in the Birdhouse, was released from Foothills in 2008. My first full Length book, Town for the Trees, was released in 2011. In 2012, my most recent chapbook, Friday in the Republic of Me was issued. In 2013, my second full length book of poetry, Hobble Creek Almanac was released from Aldrich Press. In early 2014, my third full length poetry collection, Sailing This Nameless Ship was released from BlazeVOX. The manuscript was published with the assistance of a 2014 Jackpot Grant from the Nevada Arts Council. I have also received an honorable mention in the Nevada Arts Council Artist Grants Program for the 2007-2008 year.